She breathed deeply and slowly so as not to antagonize her corset. “I need tea,” she said, using both hands to hoist and transport her gargantuan carpetbag as she shuffled off to her car, her hobble skirt inhibiting her strides and causing her to take petite geisha-like steps. She arrived at her Model T panting, and for several minutes fumbled with the shop keys and papers as she sought her own keys in her massive all-purpose satchel.

After experiencing a variety of tactile sensations ranging from fluffy to sticky, her gloved hand emerged holding a coin. She made her way to the nearby telephone booth, trying desperately to flick the sticky stuff off of her glove. All she managed to accomplish was the flinging of her telephone-designated coin into the great beyond. In searching for another coin, she fortuitously found her car keys—but then lost both the phone number she was to call and her train of thought as to whom she was calling or why … and then proceeded to lose track of her keys again. When she finally sorted herself and placed the call, the voice on the other end immediately put her at ease. 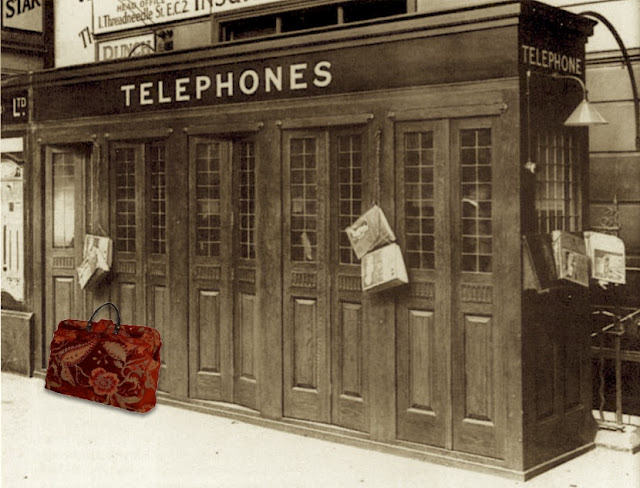