Of Satin and Satan 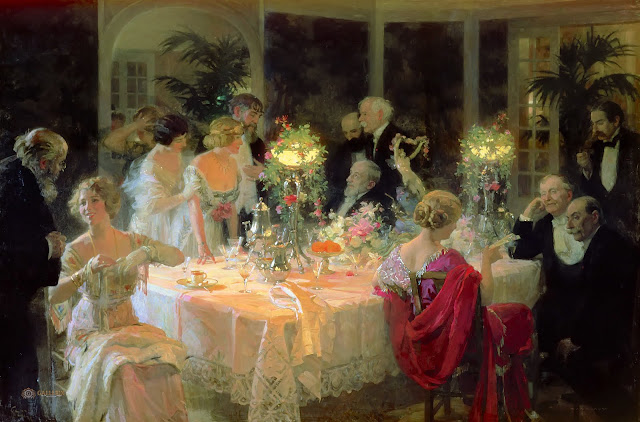 ETIQUETTE OF GLOVES AND NAPKIN

Ladies always wear gloves to formal dinners and take them off at table. Entirely off. It is hideous to leave them on the arm, merely turning back the hands. Both gloves and fan are supposed to be laid across the lap, and one is supposed to lay the napkin folded once in half across the lap too, on top of the gloves and fan, and all three are supposed to stay in place on a slippery satin skirt on a little lap, that more often than not slants downward.

It is all very well for etiquette to say “They stay there,” but every woman knows they don’t! And this is quite a nice question: If you obey etiquette and lay the napkin on top of the fan and gloves loosely across your satin-covered knees, it will depend merely upon the heaviness and position of the fan’s handle whether the avalanche starts right, left or forward, onto the floor. There is just one way to keep these four articles (including the lap as one) from disintegrating, which is to put the napkin cornerwise across your knees and tuck the two side corners under like a lap robe, with the gloves and the fan tied in place as it were. This ought not to be put in a book of etiquette, which should say you must do nothing of the kind, but it is either do that or have the gentleman next you groping under the table at the end of the meal; and it is impossible to imagine that etiquette should wish to conserve the picture of “gentlemen on all fours” as the concluding ceremonial at dinners.