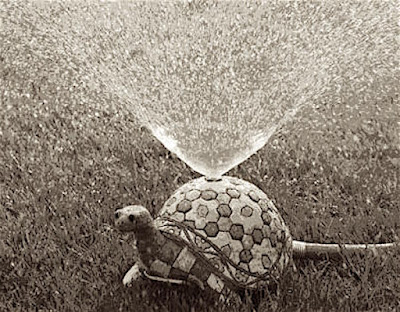 Owing to the fact that he was a foot taller than she, she craned to meet his lips, going up on her tippy toes to bridge the gap. She was still several frustratingly distant inches away from kissing contact. Undeterred, she made the quick decision to step up onto the cast iron turtle lawn sprinkler next to her foot. The extra height did the trick and as the warmth of Hank’s breath approached her waiting mouth she closed her eyes and prepared to melt into her first kiss. This would be a night to remember.

She immediately drifted off into a depth of bliss beyond her imaginings, and felt as if she were falling. In fact, she was. The toe of her right shoe slipped off the turtle’s back, activating its sprinkler head and shooting an emphatic jet of water right up her skirt. She stood screaming and holding her hands out to keep the blast from assaulting her face as opposed to simply backing away from the geyser. Hank quickly bent down to turn the device off, braving a faceful of water and overall dousing in so doing.

Penelope stood gape-mouthed and dripping from every follicle and pore. Hank straightened his shoulders, pulled down sharply on his lapels and shook his head wildly like a playful pup, sending a light spray onto both Penelope and the house’s windows. The pair stared at each other for a moment, then burst into laughter, rousing neighbors who turned on their lights in response. When Penelope’s own front door opened and she heard the words, “Who’s there? I warn you, I’m armed,” and saw Stella standing in the doorway brandishing a rolling pin, she dissolved into another fit of the giggles – as did Hank.