The upcoming Reading Between the Leaves (set in the summer of 1920) features a mysterious suffragette known to the faithful as Rebel Black who (fictiously) contributed to the Suffragette Cookbook. Here is a snippet about that mighty tome from NPR:

Give us the vote and we will cook

The Better for a wide outlook 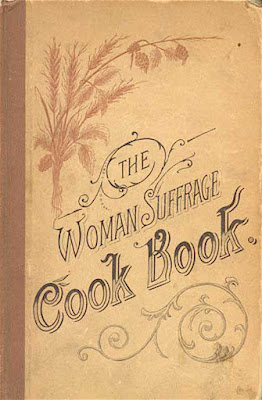 On Dec. 13, 1886, America's first suffragist cookbook, The Woman's Suffrage Cook Book, was launched on a drizzly but sold-out evening at a fundraiser at the Boston music hall. The hall was decorated with a white banner bearing the Massachusetts Woman Suffrage Association motto, "Male and female created He them, and gave them dominion."

Members included the novelist Louisa May Alcott, who would become the first woman registered to vote in Concord. Though she hadn't contributed a recipe, Alcott had just published Jo's Boys, the final book of her Little Women series, into which she had slipped in a droll description of a statue of Minerva, the goddess of wisdom, sporting a "Women's Rights" slogan on her shield and a helmet ornamented with "a tiny pestle and mortar" — a divine nod to the compatibility between cooking and voting.

Recipes were contributed by regular housewives who carried a "Mrs." before their name, as well as a parade of prominent suffragists who didn't.


Visit this link for the full article